Corpus Christi and its O&G Infrastructure 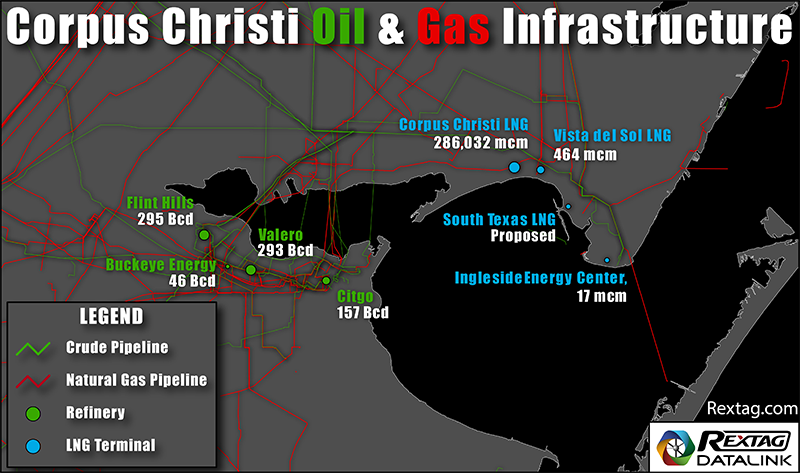 Permian’s Midstream Takeaway. Are we in for a problem any time soon? Who are the regional industry champions? Read some facts below. Today looking at Corpus Christi.  See key facilities on a map above.

As the threat of too much oil and too few pipelines in the Permian Basin continues to loom, midstream developers are trying to keep up with the aggressive pace of producers with some looking toward growing export opportunities on the Texas Gulf Coast.

Magellan is one of several companies looking to lay a new pipeline from the Permian to Corpus Christi, Texas, and also is currently expanding its BridgeTex Pipeline in the basin.

Why the Permian? If you look at the analysis that shows breakeven economics based on where to spend the money, producers that have acreage in the Permian are getting the most profits.

At the same time, the Energy Information Administration is also projecting an increase of crude oil production in the Permian Basin to an estimated 2.4 million bbl/d in May. The Permian produced about 2 million barrels per day (bbl/d) of crude oil in May 2016.

However, midstream developers are already addressing the projected constraint with announced midstream projects in the Permian so far during second-quarter 2017 significantly exceeding activity in the rest of the U.S., according to a May 23 report by Stratas Advisors.

So far, Permian midstream developers have announced 23 new projects, expansions or completions at expanding pipelines, terminals and docks, tanks and processing plants during the second quarter compared to the 20 projects elsewhere, the report said.

Through its Longhorn and BridgeTex pipeline systems, Magellan currently has takeaway capacity of roughly 575,000 bbl/d, which is expected to increase by 100,000 bbl/d in a month or so following completion of its BridgeTex expansion project.

“Through the process of doing all that we’ve identified some ways to increase the capacity even further,” he said. “We’re very confident we’ll get to 450,000 and we may even be able to get above 450,000 with fairly limited work that needs to be done.”

Barnes said the new pipeline Magellan is developing to transport Permian crude to Corpus Christi will have multiple origin points, both in the Delaware and Midland basins, as well as multiple delivery points in the Corpus Christi area.

Indeed, Texas continues to rank as the U.S. leading natural gas producing state. As a reflection of that, gas transmission and processing activities mount. The complete landscape of the Lone Star State's natural gas industry can be found on Rextag's Texas Natural Gas Infrastructure Map.