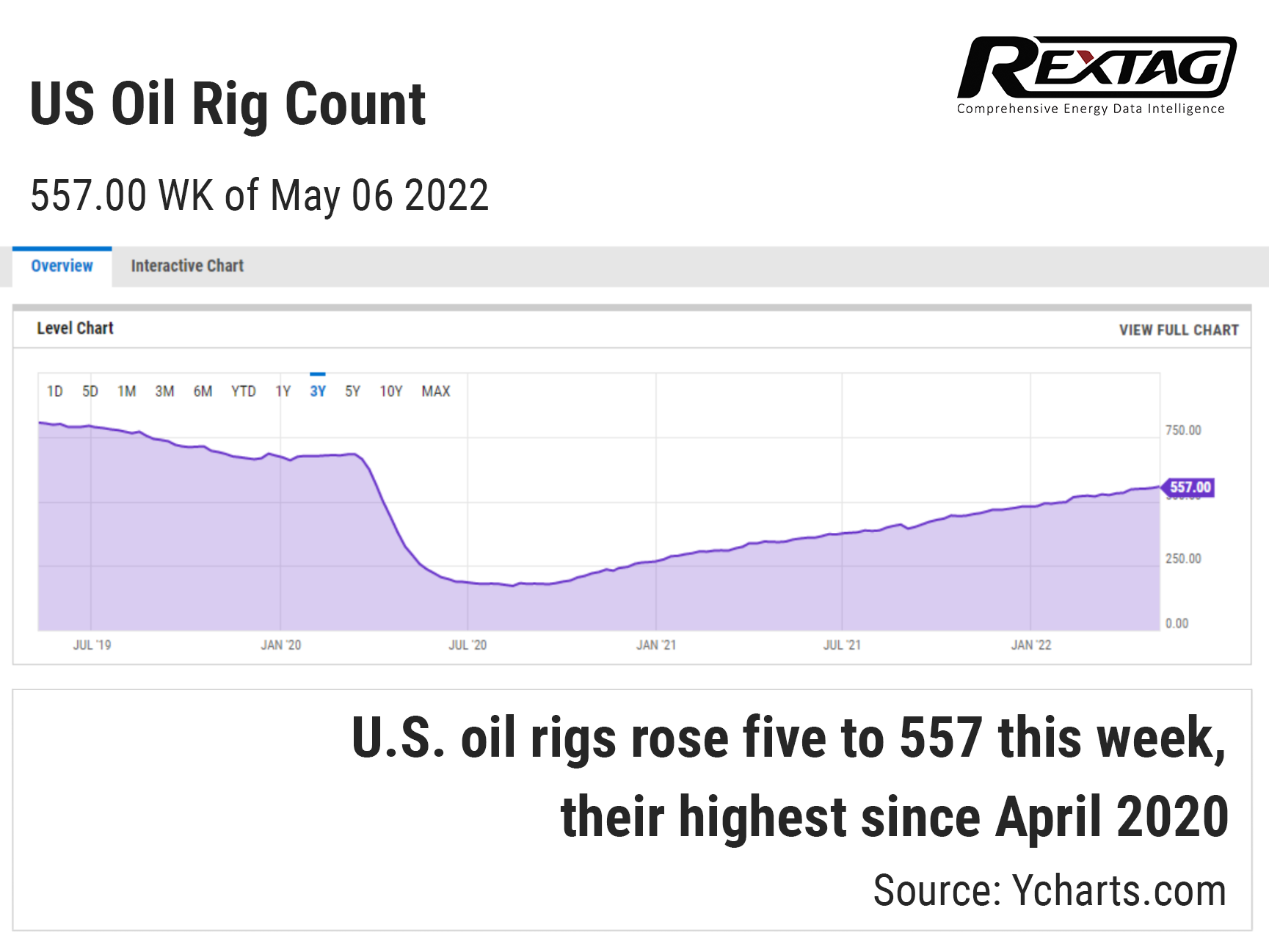 In the midst of the high prices and the U.S. government’s pushing, in the last week, the number of oil rigs increased by 5 and in total makes 557, its highest since April 2020, according to Baker Hughes Co BKR.N. Concerning the gas rigs, they gained 2 to 146, their highest since September 2019.

However, most shale producers preferred shareholder returns over new spending on production.

Due to the Russian invasion of Ukraine on 24th, February, the U.S. government has insisted that drillers produce more oil and gas in order to reduce local prices and support other countries to avoid Russian energy dependence.

Being an early indicator of future output, the rig count climbed for a record 21 months in a row through April. Nevertheless, weekly increases have mostly been in single digits and oil production is still far below pre-pandemic record levels.

Given that this growth has been expected, recent global market changes make forecasting the output even more challenging. Learning how production will change is easier with early activity tracking, a new service recently launched by Rextag. 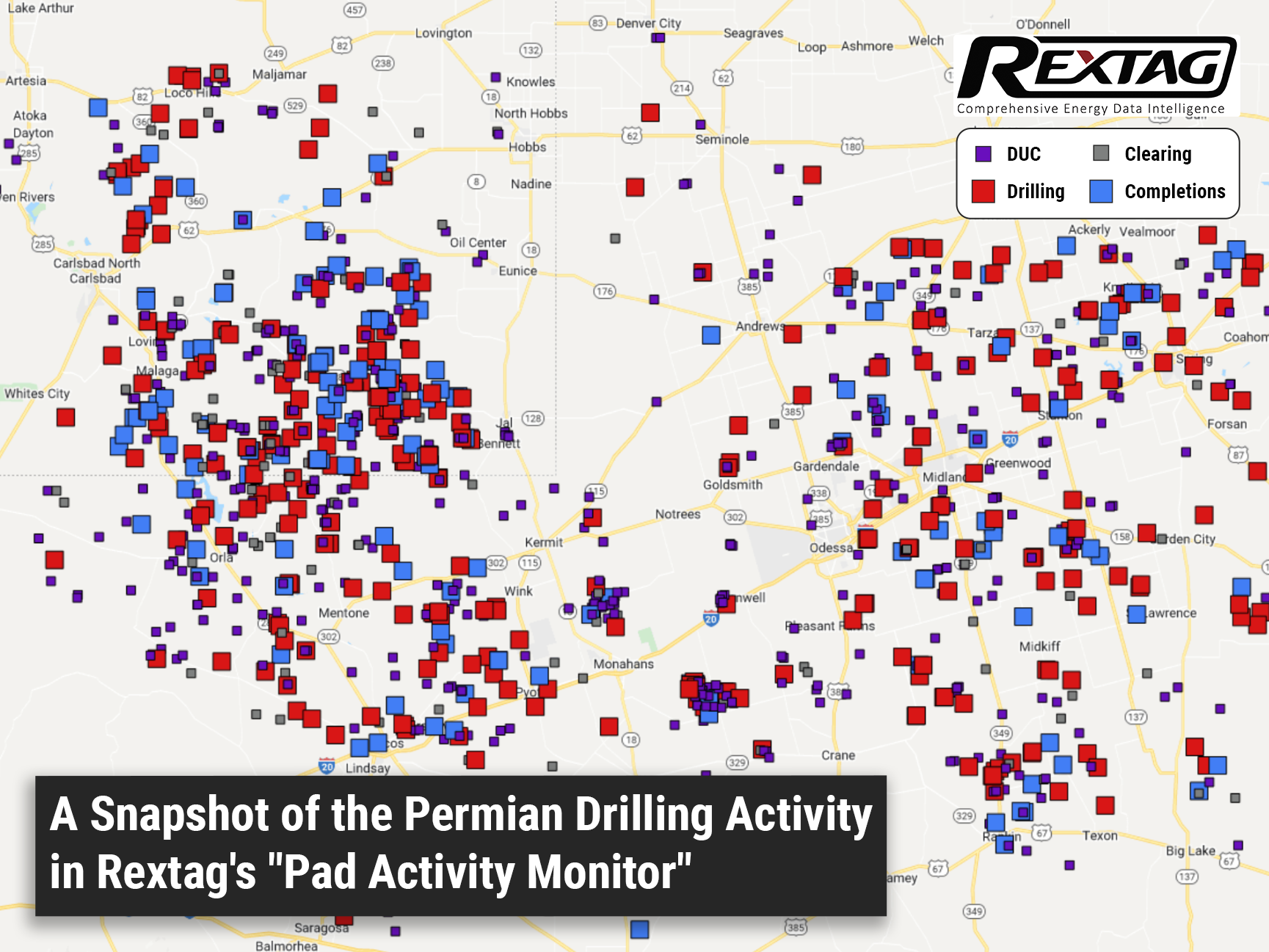 Rextag's Pad Activity monitor (#PAM) assists to learn about potential increases or decreases in oil and gas production months ahead of others and how potential volumes could impact storage and transportation across the Permian Basin. With the help of satellite imagery and artificial intelligence, you are able to monitor well pad clearing, drilling operations, fracking crew deployment and completions with new data collected approximately every 2 days.

The incredible first-quarter profits were reported by top U.S. shale producers that week. As oil prices churned at the highest levels in years, lots of money was poured into higher dividends and share buybacks.

A large number of energy companies are going to increase capital spending for a second year in a row in 2022 as the oil prices are up about 47% so far this year to about $110 a barrel, after soaring 55% in 2021.

The independent exploration and production (#E&P) companies intend to raise expenditures by about 29% in 2022 compared with 2021 after increasing spending by about 4% in 2021 regarding 2020, as U.S. financial services firm Cowen & Co. declared.

If you are interested in learning more about PAD Activity Monitor, please, contact our Houston sales office or SCHEDULE A DEMO to learn how Rextag can help you leverage energy data for your business.

No sooner had the crude prices soared above $100/bbl than the industry professionals believed in an incredible growth of drilling activity in North America&rsquo;s largest shale patch. Analysts speculate that additional output of 500,000 barrels of oil daily would become a significant part (4%) of overall U.S. daily production. That is going to flatter oil and gasoline prices. Drilling permits in the Permian Basin are persistently growing, averaging approximately 210 at the beginning of April. Moreover, the permits trend is noticed as an all-time high as a total of 904 horizontal drilling permits were awarded last month. Nowadays, learning and analysing the current situation and predicting the future development become easier with early activity tracking, a new service recently launched by Rextag. Rextag&#039;s Pad Activity monitor (PAM) allows you to see well pad clearing, drilling operations, fracking crew deployment and completions with new data collected approximately every 2 days with the help of satellite imagery and artificial intelligence. While the increase in drilling will result in higher production, U.S. shale producers will have to overcome several hurdles including labor shortages and supply constraints.

The EIA forecasts that total output in the main U.S. shale oil basins will increase 142,000 bbl/d to 8.761 million bbl/d in June, the most since March 2020. Oil productivity in the Permian Basin in Texas and New Mexico is supposed to go up 88,000 bbl/d to a record 5.219 million bbl/d in June, as the U.S. Energy Information Administration (EIA) announced in its report on May 16. In the largest shale gas basin, the productivity in Appalachia in Pennsylvania, Ohio and West Virginia will grow up to 35.7 Bcf/d in June, its highest since beating a record 36 Bcf/d in December 2021. Gas output in the Permian Basin and the Haynesville in Texas, Louisiana and Arkansas will rise to record highs of 20 Bcf/d and 15.1 Bcf/d in June, respectively. Speaking of the Permian future output, putting hands on upcoming changes in production has recently been made easier with the new Rextag&#039;s service - Pad Activity Monitor. Thanks to satellite imagery and artificial intelligence, customers are able to monitor the oil and gas wells and are provided with near real-time activity reports related to drilling operations. However, it is noticed that productivity in the largest oil and gas basins has decreased every month since setting records of new oil well production per rig of 1,544 bbl/d in December 2020 in the Permian Basin, and new gas well production per rig of 33.3 MMcf/d in March 2021 in Appalachia.